“At the present, there are more than enough sad and depressing stories out there. So it’s especially refreshing to have something positive happen,” says Inge Brigt Aarbakke, owner and CEO of Aarbakke AS.

This is the fourth year that the municipality of Time has presented its honorary award. On Wednesday, the local politicians decided that this year’s award should go to the owner and CEO of Aarbakke, the Bryne-based company that employs 320 people and makes products for the oil industry and associated sectors.

“I have a lot of people to thank for helping me get where I am today, and there wouldn’t be so much interest in Aarbakke AS without the support and hard work of all our employees,” the CEO comments.

In order to receive the award, the recipient must have contributed to increased the visibility of Time municipality, locally, nationally and internationally.

The municipality of Time presented its honorary award for the first time in 2011, when the recipient was the rock band Kaizers Orchestra.

Please feel free to contact us if you have any questions. We'll get back to you right away. 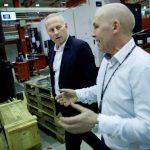 Aarbakke and Rosenberg working together to create jobsNews